The embassy staff consists of diplomats and non-diplomats. The team is headed by Ambassador Carlos Rodolfo Zapata.

Peru is one of the top 20 countries in the world and the third largest country in South America. A member of the Antarctic Treaty Consultative Commission, which has acquired the scientific research base \\\"Machu Picchu\\\" on that continent. According to Peru's population, the country has about 30 million inhabitants.

Peru has over 1 million km2 of land, 200 nautical miles in the Pacific Ocean and 60 million hectares of Antarctica.

Peru is a diverse country, with 11 diverse ecological regions, as well as 84 \\\"biodiversity zones\\\". Thanks to Peru's geographic location, it has spectacular and diverse landscapes, and it also provides a wide range of natural resources. The country also has three main regions: coast, mountains and forests.

The team of designers and developers, as well as the Smart Touch content writing team, met to discuss the concept and the main framework of the project.

The development team used the latest technology to create the website, and the design team designed a unique design that reflects the beauty and natural landscapes of Peru, while the content writing team wrote interesting content that expresses Peru in both Arabic and English languages.

Finally, after receiving the Embassy's comments and making the necessary modifications, the final version of the website has the light that holds all the required information about Peru.

Since the website is an integral part of Peru's quest to promote their country as a prominent destination for travel and investment in South America, forms of designs have been created to reflect the main essence of Peruvian cultural heritage and art. 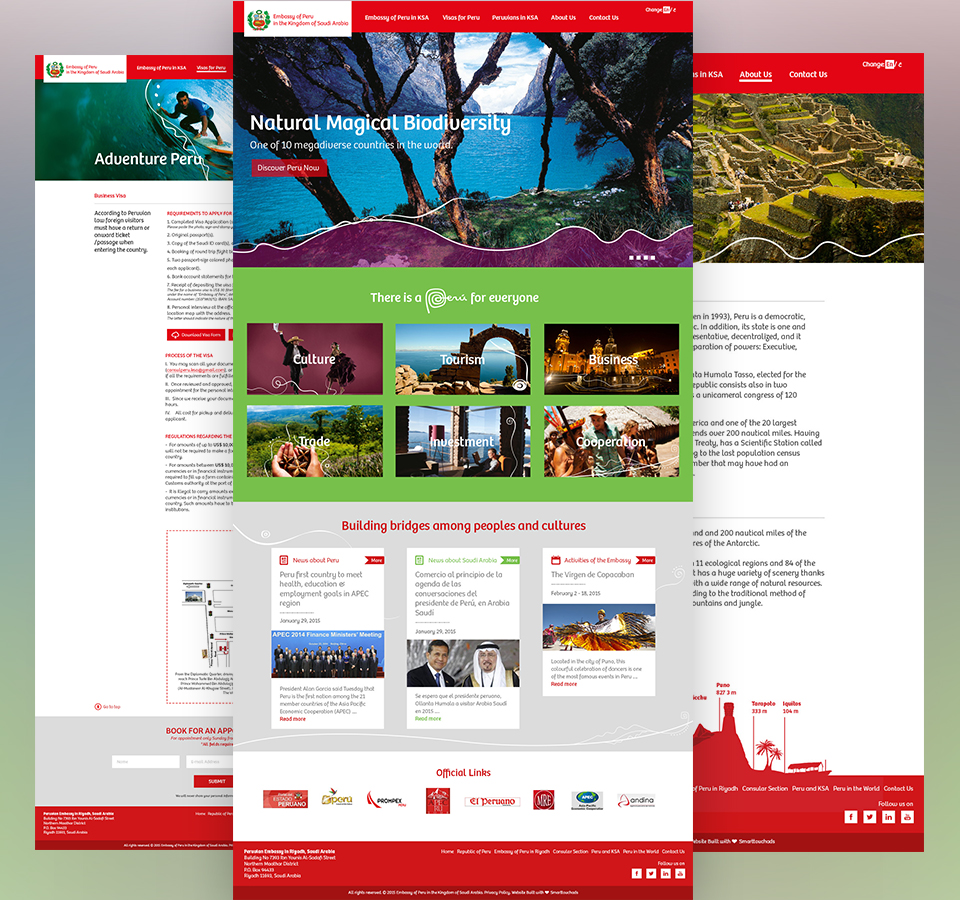 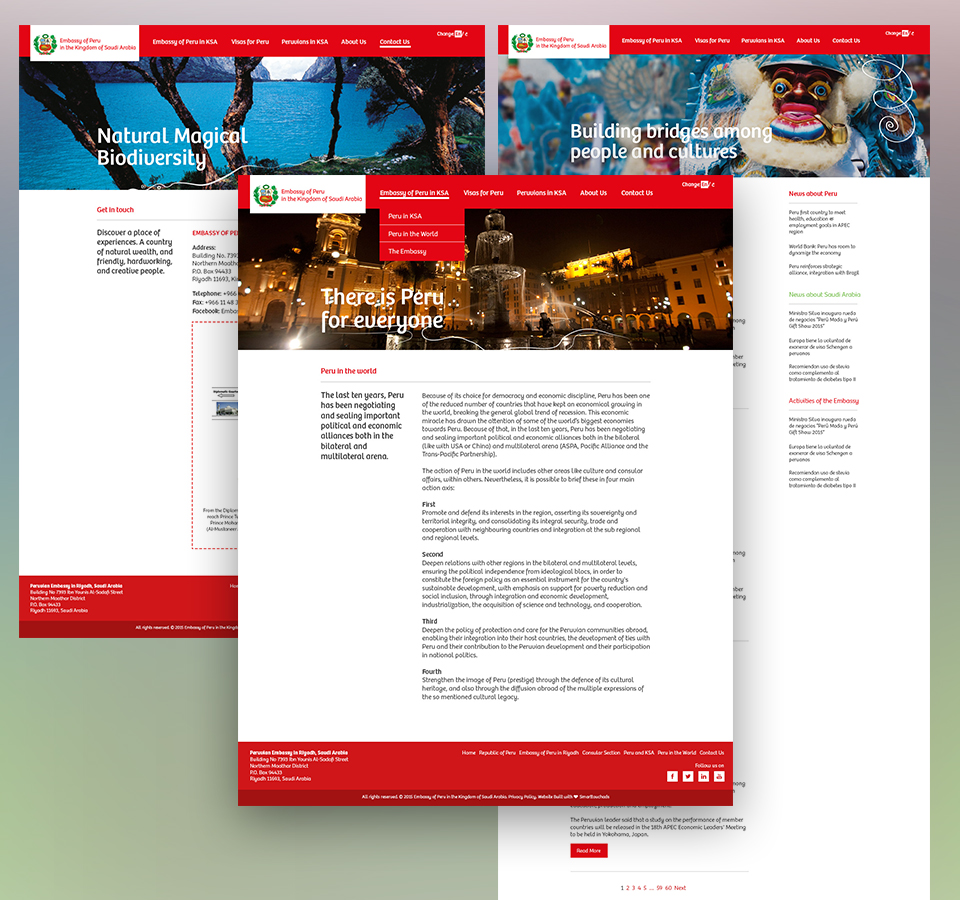 The design team has chosen the red colour for the Peruvian website design, where the red colour expresses the bright, strong elegance and has a strong tone and strong impact that helps attract attention. While white was adopted as the background of the website and the choice of black colour for writing to have a rest for the eye while reading.

The design team did not lose sight of the possible images to express the most important features and cultures of the Peruvian state. Some colours were combined with the use of green to express nature and blue as a symbol of water and the ocean.

The development team has added the advantage that the website is equipped and fit for all smartphones and Android, in addition to the use of technologies that are easy to use by the reader or browser. 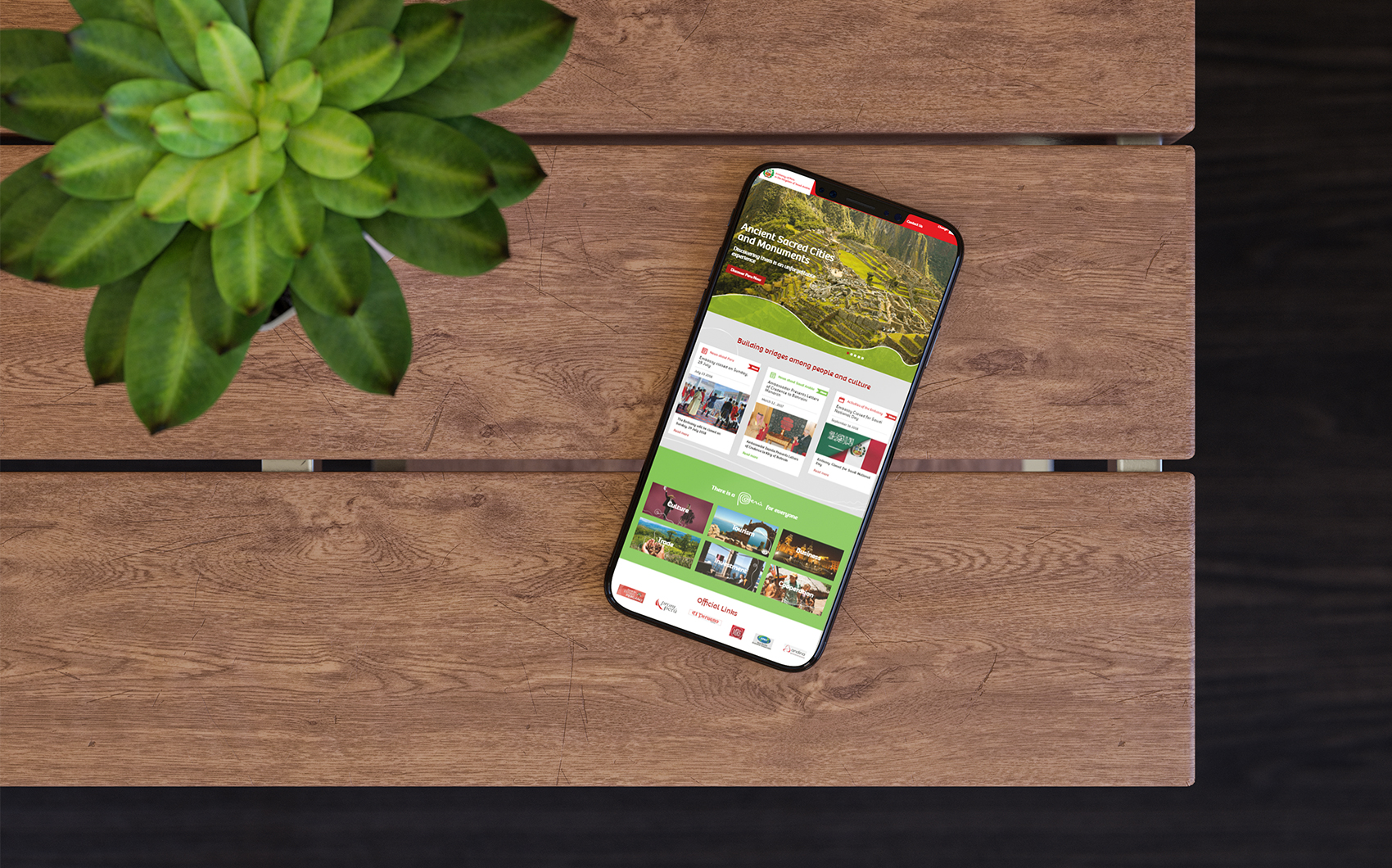